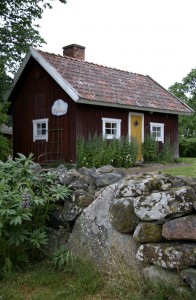 The bakery was originally Bosse’s grandmothers old brewery. In the early 1900′s they brewed beer and ‘svagdricka’ (a sweet, low-alcohol drink) here. Pork was smoked and became an important part of the farm and the family’s subsistance. When Bosse’s mother and father married, they converted the ‘brewhouse’ to an annexe used for laundry and carpentry. In 1992 when our family took over, the idea grew that the brewhouse would be a bakery.

Using a stove-builder and good friends we finally had a wood-burning oven. We cook stone-baked bread there over an open fire. The interior is mainly old flea-market finds, painted in the bakers favourite colour, blue. There is even a “modern”, 50 year-old oven in there. We bake buns and coffee cakes in here. 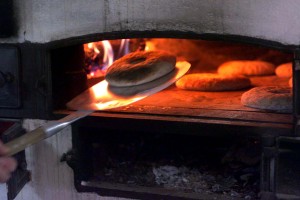 We waste no energy cooking bland bread here, only the baker’s favourite cakes are perfected and baked with care. We use organically grown flour and try to include as many other ingredients grown in the same way as possible, such as cinnamon, cocoa, oatmeal, etc. It is especially fun to bake something both delicious and traditional. Something with its own little story. 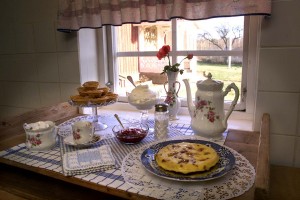 Speaking of which, remember “Queen Victoria’s favourite cake” which has quite a history to it, with a little twist. Recently an opportunity arose to let our Crown Princess Victoria try the treat and learn about it’s history.